For as little as $5 per month, poor parents in Kenya can now afford the quality education that they hope will give their children a future outside poverty.

Bridge International Academies is a chain of more than 100 low-cost private nursery and primary schools scattered across the poor and densely populated areas of Kenya. The school is a business that is proving beyond every doubt that it’s possible to provide cheap and quality education to the poor and still turn a profit.

With more than 45,000 students currently enrolled in its schools (as at June 2013), its founders have the lofty ambition of teaching no less than 10 million African children in the next couple of years. Given its impressive growth in just five years, this goal may just be within reach.

The short 3-minute video you’re about to watch shows how this interesting concept is showing the bright light of education to thousands of kids who live in Kenya’s slums and shanties.

For me, the most touching part of the video was when a poor parent said his kids had improved a lot and now speak English at home.

Like the Omega Schools chain in Ghana, Bridge International Academies was born out of a deep passion to use education as a weapon for wiping out global poverty.

Jay Kimmelman, Shannon May, and Phil Frei have worked in many poor parts of the world and noticed firsthand the huge gap in the quality of education poor children receive around the world.

And they also noticed another interesting trend:

Despite their difficult financial situation, many poor parents in Africa are willing to make huge sacrifices to get high quality education for their kids. Many of Africa’s poor strongly believe that education is the surest bridge out of poverty for themselves and their kids.

Individually, poor people may not have much money but their large number creates such a huge and lucrative market.

In 2007, borrowing some inspiration from Starbucks, the World’s Number One coffee franchise, Jay, Shannon and Phil wondered why nobody had rolled out a large-scale chain of low-cost and high-quality schools that service this lucrative demand from poor people. And it made perfect sense!

Getting lots of poor kids to attend (high volume) would keep costs low. Putting standards and processes in place would ensure quality across the chain, and asking parents to pay would ensure that the schools wouldn’t need to rely on donations or grants to remain open.

That’s how the idea for Bridge International Schools was born!

The founders’ background in education and their experience working with poor African communities had prepared them for this challenge.

Jay founded Edusoft, an education software company based in the USA.

Shannon has a strong background in education, international development, and sustainable design.

Phil has an impressive history of developing award-winning educational toys (some of which are licensed by LEGO®!).

Armed with their brilliant idea and a burning passion, the founders opened the first Bridge International Academy (in January 2009) in the Mukuru slum in Nairobi offering three kindergarten classes. By May of the same year, it opened a second academy. 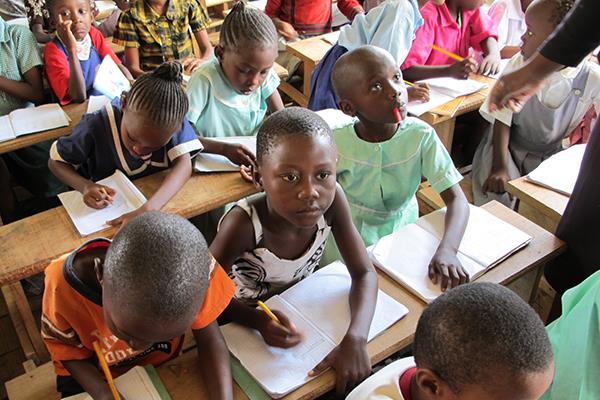 In 2012, the school chain had grown to 83 academies across Kenya with more than 25,000 pupils in its nursery and primary schools. In fact, its pupils were scoring more than 200 percent higher than their peers (in government schools)!

Today, this modest private nursery and primary school chain teaches more than 45,000 pupils who would never have experienced good quality education in their lives.

Bridge International Academies has grown to become the largest chain in Kenya, with more outlets than any other business in the country (including fast food franchises and shopping malls!)

Like every great business with promising potentials, investors have lined up behind Bridge International. Although the sums invested cannot be confirmed, the pedigree of these investors give a clue that Bridge will become a huge corporation in the near future.

NEA, one of the world’s biggest Venture Capital firms, has Bridge as its first major investment in Africa. The Omidyar Network, a leading social investment firm (started by eBay founder Paul Omidyar) is also a core investor. Other investors are Learn Capital and Khosla Ventures.

As from 2013, Bridge International plans to spread outside Kenya into other countries in East (Uganda, Ethiopia) and West Africa (Nigeria)

How the Bridge idea works…

The magic and success of Bridge International’s idea lies in its ‘Academy-in-a-box’ model which uses standards to deliver high quality education across all schools in the chain.

Its curriculum (which aligns with the Kenyan National curriculum) is standardized and transformed into scripted lesson plans. These scripts, which are delivered through iPad-like tablets, include step-by-step instructions showing everything teachers should do and say in class.

The teachers use the tablets to capture different forms of data that are sent to headquarters and used by the central management team to monitor class attendance, track test scores, and assess teachers’ performance. All of these are done in real time!

Because it operates a standard and closely-monitored operation, Bridge International is able to set up schools very fast!

Through its use of technology, Bridge is able to keep costs (and school fees) very low. In fact, its fees (an average of $5 per month) are 70 percent lower than other low-cost private schools in the communities in which Bridge operates.

This low price advantage allows over 90 percent of families in poor communities to afford to send their children to Bridge Academies.

In our popular article: 3+ Guaranteed ways to find Profitable Business ideas in Africa, we exposed the lucrative business ideas that lie in solving many of the challenging problems facing Africans every day.

Education is a huge and shameful part of our everyday problems. With more poor people hoping on education as their bridge out of poverty, millions of them are making huge sacrifices to give their children the best quality education they can afford.

Despite this huge demand for low-cost and quality education, the government’s ‘free’ education system has failed across Africa. Poor funding, rapidly falling standards and general system failure is forcing millions of Africans to seek alternative and better quality options.

Anyone who can provide learn and apply Bridge International’s formula is very likely to achieve astounding success in Africa.

We have a full article that exposes a lot more opportunities in Africa’s education sector. It’s titled: “The business of Education in Africa – 7 lucrative opportunities in this huge and rapidly growing market” You should check it out!

If you believe this is a business idea that works for you, start working on a business plan and take action as soon as possible. You could also choose from many more amazing business ideas in the Business ideas section of this website.

We would love to hear from you about your successes, challenges, advice and questions. Do not forget to leave a comment in the section below and share this opportunity with your friends.