You’re about to gain some business insights from this interesting mobile toilet success story from Lagos, Nigeria.

If you’re an entrepreneur at heart, you’re probably always looking for the next best business idea. Many of us believe that great business ideas should be something totally new and unheard of; something like the next Facebook, a creative recipe or a breathtaking product.

Well, while there’s nothing wrong with a bright new idea, many of the best business ideas in Africa are right under our noses.

On a continent where many basic needs are yet to be met, entrepreneurs who focus on satisfying these basic needs are twice more likely to run into a profitable business idea than those who want something totally new.

That’s exactly what Isaac Agbetusin did when he decided to provide mobile toilet facilities to millions of people in Lagos – one of Africa’s most populated cities.

The big mistake is: nobody wants to talk about shit!

It’s not surprising that we hardly ever want to discuss the ‘shit business’.

Yes, it’s an ugly (and smelly) part of our lives that we rather not talk about. We pretend it doesn’t exist; in fact, very few people reading this article ever think of what happens to their waste once it’s been flushed down the toilet.

The hard truth is: shit exists because we produce it. It’s a natural consequence of the things we eat and for as long as we exist, shit always will! And like all the other tons of waste we produce everyday (including garbage), someone has to get rid of it or else our environment will be impossible to live in.

People are willing to pay to dispose their waste in a cheap and convenient way; it’s a desperate need that exists in many parts of our continent.

Like we revealed in our popular article, 3+ Guaranteed ways to find profitable business ideas in Africa, finding a solution to people’s needs is one of the easiest ways to a lucrative business idea.

Take Lagos for example. The city is home to more than 13 million people and the centre of intense economic and business activities in Nigeria. Despite this huge population and all its hustle and bustle, public toilet facilities are grossly inadequate and often unusable by people who want to answer nature’s call.

As a result, it’s often a common sight to see people urinating indiscriminately in open and public spaces while many others, who have more serious business than urine, head into nearby bushes.

With many people disposing their waste in all sorts of places, Lagos like several other cities in Africa, faces severe negative effects on public health due to poor human waste disposal.

‘Do Not Urinate here’ is one of the most common and disobeyed signs in many African cities and towns (photo credit: flickr.com/Charles Haynes)

Everyday across Africa, millions of people pour into the busy streets to make a living. When they leave their homes in the morning, many of them do not return until several hours later.

Most people spend a huge chunk of their time on the move, in markets and other public spaces. And very often, nearly everyone has a need to use a toilet but can’t find one; even when they’re willing to pay to use it! 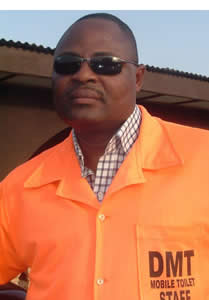 Popularly known by his friends as ‘Otunba Gaddafi’, Isaac Agbetusin trained as a Graphic artist and worked as a security professional before he decided to get into the ‘shit business’ in 1996.

His inspiration came while he was making arrangements for a friend’s wedding party which would have over 10,000 guests in attendance.

How would these people answer nature’s call  after all the eating and drinking?

After searching for nearly four weeks, he couldn’t find any company that provides mobile toilet facilities for parties and public events. That’s when he decided to start his own mobile toilet company, Dignified Mobile Toilets, popularly known by its acronym – DMT.

To date, his company has manufactured over 3,000 mobile private toilets. It produces about 200 units every month for sale and for hire across Nigeria and in the West Africa region.

DMT has also spread beyond Lagos (where it started) to over 20 cities in Nigeria and is present in seven countries in West Africa.

Popular for his favourite tagline ‘Shit Business is Serious Business’; Otunba Gaddafi has given a professional face to human waste disposal. By working with widows and unemployed youths in several parts of the city, his company gives out these private toilet units on hire.

Because they often do not have the capital to pay for the units, these widows and youths pay a fixed amount to the company every month over a two-year period after which they become full owners of a thriving mobile toilet business! 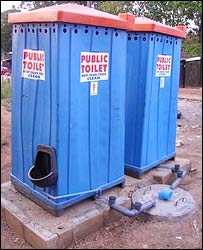 And how much does it cost any regular person to use these mobile toilets? For only 20 Naira (about 10 US cents) anyone with an urge to answer nature’s call can use these toilets rather than pollute the environment!

It’s a cheap and convenient option for anyone who is caught in the hustle of Lagos busy streets and markets.

The company also rents out mobile toilet units for private parties, weddings, trade fairs, conventions and all kinds of events.

In fact, DMT also makes special VIP units to serve the rich and upper class segment of the market. These units are air-conditioned (imagine that!) and have red carpets, MP3 players and a flat-screen television for its users! I wonder if anyone who goes into these VIP toilets ever comes out!

Apart from the money it makes from the sale and rent of its mobile toilet units, DMT earns significant revenue from sponsored adverts which it places in all these toilet units.

In a bid to consolidate the successes of this brilliant business, DMT is currently planning to build a biogas production plant which will convert all the human waste it collects from across the city into gas that will be used to generate electricity.

If this is achieved, it would be one of the greatest and few attempts by any African entrepreneur to produce sustainable energy from human waste.

The company has also been approached by the Bill and Melinda Gates foundation to work on projects that will provide easy access to decent toilet facilities which will help to improve personal hygiene and fight endemic diseases such as polio and malaria.

The short (three-minute) video you’re about to watch is a CNN interview with ‘Otunba Gaddafi’ sometime in 2010. This passionate and funny entrepreneur shares his experience in the ‘shit business’ and the huge opportunities that lie within it.

It’s quite interesting and eye opening. Watch and learn…

You need to start thinking differently about waste…

Unfortunately, Otunba’s dreams for his business were cut short when he passed away (in March 2012) after a brief illness.

However, his friend and business partner, Caje Oleforo, now runs the company. The business’s mobile toilet units remain a common feature in many parts of Lagos including motor parks, bus stops and several other public places.

This amazing business model proves beyond every doubt that people will pay for the convenience of using clean and decent toilet facilities. It also reveals a huge opportunity to provide mobile toilet facilities to organisers of both public and private events – such as outdoor parties, conferences, conventions and many others.

The market for both private and public toilet facilities is huge and will remain so for as long as humans continue to produce biological waste.

Like Kenya’s Lorna Rutto who is converting plastic waste in Nairobi into wealth, there are lots of opportunities to build interesting businesses out of the waste generated in Africa.

If properly conceived, waste has the potential to improve our economic, health and social well-being.

This article was written to inspire you to look out for and exploit similar opportunities in your area.

We would love to hear from you about your successes, challenges, advice and questions. Do not forget to leave a comment in the section below and share this inspiring story with your friends using the Facebook, Twitter and Google+ buttons below.