Africans consume up to 40 percent of bananas produced in the world every year.

Like maize, rice and wheat, bananas are one of the most important and widely eaten food staples in East Africa. Kenya, Uganda, Tanzania, Rwanda and Burundi are among the world’s largest producers and people in these countries eat up to 400 kilograms of bananas every year – the highest consumption rate in the world!

Despite this huge demand and market, many smallholder banana farmers in Kenya do not make enough money from their harvests due to poor storage, wastage and exploitative middlemen.

In just three years, Eric Muthomi, a 27-year old law graduate has built a successful business from solving the banana problem in Meru, his Kenyan hometown.

This article tells the inspiring story of this young man and his brilliant idea which has won several awards and placed him on the 2013 Forbes List of Best Young African Entrepreneurs.

If you can solve a serious problem that affects people in their work, business or daily lives, there is a high chance that you will make money. This is exactly what Eric Muthomi is doing by solving the ‘banana availability problem’ in his native Kenya.

Due to the huge demand for bananas and its strategic importance in food security, there are over 400,000 smallholder banana farmers in Kenya.

More than 60 percent of these farmers (who are mostly in remote rural areas) earn a full income from selling raw bananas (both ripe and unripe) on the local markets.

However, due to the production cycles of the crop, there is an excess supply of bananas to the markets during harvest time. As a result of this oversupply, many farmers make very little money from their banana harvests and are routinely exploited by middlemen who take advantage of the low market prices.

Because raw bananas have a short shelf life (can rot easily), they have to be properly stored or processed if they must last long.

Due to a lack of storage and processing facilities, bad roads and poor access to markets, about half of the bananas harvested in Kenya every year get rotten, are wasted and never get sold. As a result, many Kenyan farmers suffer serious losses after all the money, time and effort invested in farming bananas during the year.

Bananas are not available all year round; they become very cheap during harvest time and expensive in the dry season. This is dangerous for a crop that is used to avoid famine and serves as a food buffer in times of scarcity between cereal harvests.

In addition to this problem, thousands of farmers remain poor as a result of waste and poor yields from their banana harvests.

Eric Muthomi’s solution to the rescue… 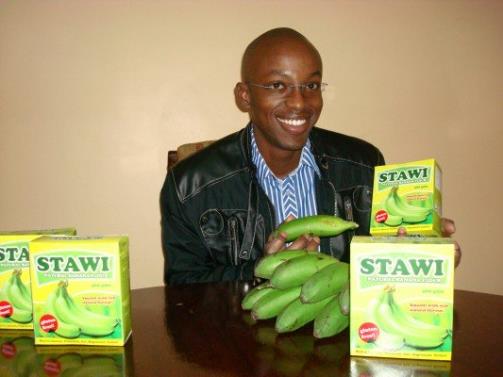 Eric is a 27-year old graduate of law from the Catholic University of East Africa.

From an early age, he had made up his mind to start his own business after school. He first noticed the problems most banana farmers were facing in Meru, his hometown in Central Kenya and one of the largest banana producing regions in the country.

He decided to start up a company that would buy raw bananas from local farmers at guaranteed prices, process them into banana flour and package them for sale in the market. This is the idea that formed his company, Stawi Foods.

Stawi Foods(stawi means ‘prosperity’ in Swahili), has improved the lives of thousands of banana farmers by providing them with sure income. It has also helped to increase the shelf life of bananas which would have rot and wasted if they are not sold soon after harvest.

The banana flour, which is made from processed green bananas, is gluten free, nutritious and can be used to make baby food, porridge, mashed food, baked foods and soups. This versatile branded product which is sold as ‘Stawi Natural Banana Flour’ is distributed in several major supermarkets across Kenya.

Eric Muthomi’s idea now allows smallholder banana farmers in Kenya to earn 30 percent more on their bananas than they would have made if they sold it in the local markets.

In addition, selling their banana harvests to a guaranteed buyer (Stawi Foods), protects them from the low and fluctuating prices of banana in times of harvest and scarcity. This is helping many young people to remain gainfully employed as banana farmers.

At the moment, this young company (which only started business in 2011), works with more than 100 groups of farmers in Meru which supply the raw bananas used for making Stawi Banana flour. The raw bananas are processed using both manual labour and processing equipment by a team of full-time employees and casual workers.

As his Stawi Banana Flour gains popularity across Kenya and the East Africa region, Eric Muthomi expects to partner with more farmer groups across the country to get the raw materials (green bananas) it needs to produce more flour to meet the growing demand.

Although ‘Stawi Natural Banana Flour’ is only available in 400 gram packs, the company plans to introduce one and five kilogram packs very soon.

Since he put this amazing idea to action in 2011, Eric Muthomi has attracted a lot of local and international attention.

In the same year he started Stawi Foods, Eric won the top prize in the 2011 Nature Challenge Africa competition sponsored by the Worldwide Fund for Nature (WWF) Kenya in partnership with NETFUND which encourages businesses on sustainable use of natural resources in Africa.

In 2012, he won a business plan competition organized by Kenya’s Ministry of Industrialization which looks out for innovative business ideas every year. Eric beat over 3,000 other contestants who own young and startup manufacturing businesses to become the 2012 winner.

In the same year (2012), Eric Muthomi won another award for his brilliant business idea in the Chase Bank Enablis ILO Business Launch Pad Competition in the Agribusiness Agro-processing category. This award rewards the most exciting and promising business plan among Kenyan entrepreneurs.

He was also listed by Forbes Magazine as one of Africa’s Best Young Entrepreneurs.

With all this attention, Eric believes it will not be long before he penetrates the East African regional market which will act as his stepping stone into international markets like Europe and North America.

3 Things we should learn from Eric Muthomi’s success…

Our goal for sharing the success stories of African entrepreneurs is to inspire you and also show you what is possible.

However, on the road to success, there are often hard lessons, tough choices and rough challenges.  Eric Muthomi’s experience on this road is rich with lessons that will inspire you to take action on that business dream of yours. 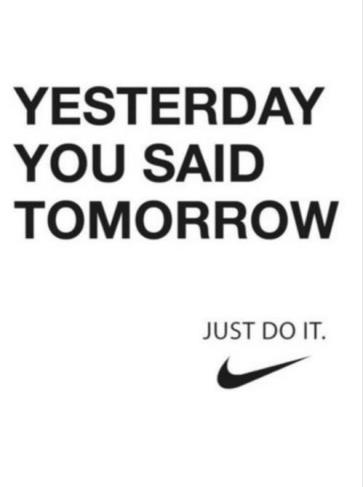 Eric Muthomi has caught the world’s attention because he decided to take action on his dream even though he had a reason to postpone it or wait for the ‘right’ time.

When he started his business, Stawi Foods, he was only 25 years old and fresh out of university. He didn’t even have any money to start a business so he borrowed from his family.

In a previous article, we explored 10 interesting ways to raise the capital you need to start a business. You should check it out!

Apart from the challenge of getting start up capital for his business, Eric had to scale through the long and tiring licensing requirements and approvals that are compulsory for ‘food processing’ and ‘manufacturing’ companies in Kenya (a similar experience across many African countries).

In addition to all these, he also faced the problem of inadequate and expensive power supply that seriously affects manufacturing businesses in many parts of Africa.

In the face of all these excuses (problems), Eric is now the CEO of a successful business that is changing lives in his country.

If you keep waiting for the ‘perfect time’ to start your business in Africa, that time may never come. You can either keep making excuses or start doing something with what little you already have! (photo credit: beyondblessedblog.com)

#2 – Inspire yourself with the problems around you.

One of the things that stand out from Eric Muthomi’s story is the simplicity of his business idea. He didn’t invent it; it’s a problem that has always existed for centuries. Smallholder banana farmers in his country have always suffered from wastage, low prices from middlemen and poor access to good markets.

By thinking of a way to solve these nagging problems, Eric stumbled on an idea that is today a lucrative and successful business.

Many of us spend too much time complaining and whining about the many problems that surround us here in Africa. We are blinded by all the complaining that we often do not see the huge goldmines that lie in solving these problems.

Eric’s story shows that if you take the time to think of creative solutions to existing problems around you, it’s very likely that you will stumble on an interesting business idea.

The lesson here is simple: don’t let problems frustrate you, use them to inspire yourself!

#3 – Make money and help people at the same time

“ I am happy when farmers come up to me and thank me for getting them a market for their product. It is such a satisfying feeling.”

While the goal of starting a business is usually to make money, touching lives and affecting people positively can be a rewarding experience which money cannot buy.

The great thing about using ‘problem solving’ as the basis for your business idea is that it removes pain, frustration and/or suffering that already exists in people’s lives. In the case of Eric’s business, it allowed thousands of poor rural farmers to remain in business while earning more money from their banana harvests.

His business is creating jobs for Kenyans and will help to earn foreign exchange for his country when he starts exporting his ‘Stawi Natural Banana Flour’ product.

It’s always a ‘win-win’ situation when you have a business idea that can make money and help people at the same time!

Do you have an idea that can solve an existing problem?

In our popular article, 3+ Guaranteed ways to find profitable business ideas in Africa, we identified problem-solving as one of the easiest ways to find ideas that can become very successful businesses.

This article was written to inspire you to look out for, and exploit similar opportunities in your environment. We suggest that you start making a list of problems you have noticed and their possible solutions.

Are there any products or foods in your area that suffer the same wastages and face the problems like the bananas in Kenya?

Can you creatively copy and apply Eric Muthomi’s business formula to your local environment?

We would love to hear from you about your successes, challenges, advice and questions. Do not forget to leave a comment in the section below and share this inspiring story with your friends using the Facebook, Twitter and Google+ buttons below.

You should also explore other inspiring profiles of successful African entrepreneurs in the Get Inspired section of this website!