Amazing! How this low-cost private school chain is educating poor children for profit in Ghana

Amazing! How this low-cost private school chain is educating poor children for profit in Ghana

Omega Schools Ghana is leading the revolution for affordable quality education in Africa.

Who would ever have thought that money could be made from educating poor African kids?

On a continent where government-run schools are notorious for low quality education and school fees in many private schools are priced out of the reach of the poor, millions of poor parents who are willing to send their kids to private schools have very few (if any) options.

Omega Schools (Ghana) is a low-cost private school chain that is currently exploiting the huge, lucrative but overlooked demand for affordable quality education in Africa.

At an incredibly affordable school fee of less than $1 a day per student, this school franchise is attracting thousands of poor African kids to school while making a very tidy profit.

Let’s take a look at how it pulled it off!

The idea of low-cost private school chains in Africa (like Bridge International Academies in Kenya) appears to be gaining ground.

The idea for Omega Schools was conceived by Ken Donkoh, who comes from the Cape Coast region of Ghana. Coming from a very poor background himself, he clearly understands the challenges poor people face when it comes to getting affordable quality education for their children.

He observed that the pay-as-you-learn model would be popular among poor people as it allowed them to pay a daily school fee (instead of the common monthly or term-based school fees).

Ken also noticed that the astounding success of mobile phone companies in Africa is mainly due to the pay-as-you-go service that allows millions of poor people to buy cheap call credit based on their incomes.

That was when he hit his golden idea!

He would develop a profitable low-cost private school chain that targets thousands of poor children in Ghana. A social development business that would make good profits while providing good quality education to generations of Africans!

Using a business plan he developed for this idea during his MBA, he approached Professor James Tooley, who is well-known for his groundbreaking research on private education for the poor in India, China and several parts of Africa.

After a couple of twists and turns, the plan was clear for takeoff. The first school in the chain was scheduled to open its doors on 1st September 2009. 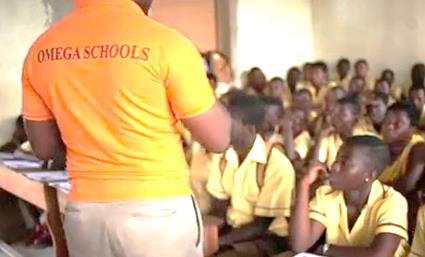 On D-day, Ken Donkoh and Professor Tooley expected only 200 students to show up. Instead, more than 400 kids showed up.

Today (in July 2013), Omega Schools has more than 12,000 students in 20 schools across Ghana offering education from nursery to Junior High school.

For a daily school fee of 1.5 Ghana Cedis (about US$ 0.75), Omega students get uniforms, a school bag, work books and exercise books, and a hot daily lunch. Unlike what is common in many of the ‘free’ government schools patronized by the poor, there are no hidden charges in Omega’s fees.

To ensure its low cost structure, the school employs secondary school (high school) graduates as teachers. These guys are quick to learn, very enthusiastic to teach and don’t cost as high as university or government-trained teachers.

With only two weeks of pre-service training, Omega’s young teachers become ready to take up the teaching challenge in its classrooms!

Omega schools are open 7 hours a day (compared to 4 hours at government schools). Its low-priced private education model is attracting a lot of attention both locally and internationally.

In mid-2012, Pearson, the giant UK-based education company announced that Omega schools would receive a portion of its $15 million investment fund targeted at providing affordable education to poor children in Africa and Asia.

With similar investments and its unique brand, Omega Schools plans to expand beyond Ghana into other countries of West Africa.

The video below is a 30-minute clip of Ken Donkoh’s presentation during a lecture organised by the E.G. West Centre, School of Education, Newcastle University in May 2012. If you have the time, it’s a rich and revealing journey into the thoughts, ideas, innovation and efforts that have gone into this idea.

You should take the time to watch it. It’s totally worth every second!

In our popular article: 3+ Guaranteed ways to find Profitable Business ideas in Africa, we exposed the lucrative business ideas that lie in solving many of the challenging problems facing Africans every day.

Poor access to basic education in Africa is a huge and shameful part of our everyday problems. With more poor people hoping on education as their bridge out of poverty, millions of them are making huge sacrifices to give their children the best quality education they can afford.

Despite this huge demand for low-cost and quality education, the government’s ‘free’ education system has failed across Africa. Poor funding, rapidly falling standards and general system failure is forcing millions of Africans to seek alternative and better quality options.

Anyone who can provide learn and apply the Omega formula is likely to achieve astounding success in Africa.

We have a full article that exposes a lot more opportunities in Africa’s education sector. It’s titled: “The business of Education in Africa – 7 lucrative opportunities in this huge and rapidly growing market” You should check it out!

If you believe this is a business idea that works for you, start working on a business plan and take action as soon as possible.

We would love to hear from you about your successes, challenges, advice and questions. Do not forget to leave a comment in the section below and share this opportunity with your friends using the Facebook, Twitter and Google+ buttons below.