Patrick Ngowi showed the signs of entrepreneurship early in life.

From supplying mobile call credit to local vendors in his home country, Tanzania, Patrick became an importer and dealer in cheap mobile phones which he mostly sold to rural people.

Noticing that many of his customers had no electricity to charge their phone batteries, Patrick saw the goldmine in solar energy.

A few years after studying renewable energy, this young man built a million-dollar fortune in solar energy – one of Africa’s most lucrative but unexplored business opportunities. Today, he is one of the leaders in a virgin industry with a bright future.

Patrick Ngowi: How it all began…

At just age 15, and still a student in secondary school, Patrick Ngowi ventured into the mobile phone business selling call cards (recharge vouchers) which he noticed were scarce in the area.

By the time he turned 18, he was fully into the mobile phone trade selling cheap handsets which he bought from Hong Kong.  This business, which he started with a $1,800 loan from his mom and a free air travel ticket from a close friend, turned out to be very profitable.

By targeting the mass market of poor rural people who could only afford basic and cheap phones, Patrick sold more than 5,000 handsets (at an average price of $20) in one year alone!

During his short stint in the mobile phone business, Patrick noticed that many of his customers did not have access to electricity and getting their phone batteries charged was a serious problem.

This problem provided the inspiration that opened his eyes to the huge potentials of solar power and the lucrative opportunities it holds in Africa’s future.

To prepare himself for this future, Patrick went ahead to learn about the subject of solar energy in order build the solid technical knowledge he needed to succeed in the solar power business he would soon start.

At age 19, Patrick Ngowi had saved enough money to enroll in Dezhou University, China where he studied renewable and alternative energy (with particular emphasis on solar power).

He returned to Tanzania after his studies to start Helvetic Solar Contractors, a company that has now installed more than 6,000 small rooftop solar systems in his country and four other East African countries – Kenya, Uganda, Rwanda and Burundi.

Many of these systems are installed in the same communities he sold his mobile phones (which had no access to the electric power grid).

The success of his company – whose revenues are expected to exceed $7 million by the end of 2013 – proves that Africa’s market and demand for solar energy is indeed lucrative.

This astounding success has also attracted a lot of media attention Patrick’s way. In early 2013, he was featured by Forbes as one of the 10 Young African Millionaires to watch in 2013. His company was also ranked at the top of KPMG’s East Africa’s Survey of Top 100 Mid-Sized Companies in Tanzania in 2012.

Although renewable energy (like solar) makes up about 1 percent of Tanzania’s electricity sources, Patrick’s company already boasts of high profile clients like the United Nations, the Tanzanian government, World Vision and the Tanzanian Army.

To date, Helvetic Solar Contractors has installed more than 2,000 solar water heating systems in government institutions and several UN projects including schools, hospitals and hotels. This is in addition to several solar power contracts the company is executing in other East African countries such as Kenya, Uganda and Rwanda. 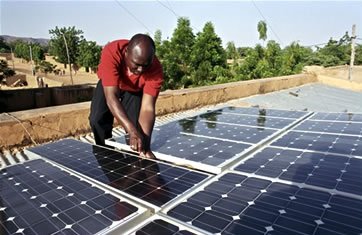 Patrick currently works with and promotes the brands of leading manufacturers of solar panels and equipment in the USA, Europe and China.

His company has also branched into other alternative energy services including handling, supply, installation and maintenance of hydro turbines and thermal systems throughout East Africa.

Apart from his remarkable entrepreneurial achievements, Patrick is a passionate environmentalist and a passionate philanthropist. Through his Light for Light (L4L) Foundation, his company offers Helvetic Solar kits that provide rural households with basic lighting and power to charge mobile phone batteries – a project he partly funds from his personal salary.

According to a recent interview with the African Business Journal, Patrick considers his greatest achievement to be his ability to provide much needed employment for his fellow citizens, and at the same time, light up some rural parts of Tanzania with solar power – as well as contributing towards Tanzania’s advance in renewable energy.

The lucrative potentials of solar power in Africa…

As huge as Patrick’s accomplishments with solar power may sound, we have barely scratched the surface of what is possible with solar energy in Africa. Of all the other alternative and renewable sources of energy available for Africa’s future – wind, sun and water – the sun (solar power) is the most abundant and free!

Do you know that Africa receives the longest supply of bright sunlight than any other part of the world? Roughly 75 percent of Africa sits on the earth’s equator and gets an average of 325 days of sunlight every year! Solar power is one of Africa’s most abundant but underexploited resources!

To give you a chilling perspective, all the 48 countries in sub-Saharan Africa (with a combined population of about 750 million) generates roughly as much electricity as Spain (a country with less than 50 million people)!

A fast-growing population, economic growth and the popularity of mobile phones (used by both rich and poor) across the continent is accelerating demand for electricity in Africa. The efforts by governments to get more people on the power grid can barely cope with the exploding demand.

Some rural areas are just too remote that it could take another decade to get them on the electricity grid. With rising fuel costs and a growing concern about climate change (and a need to use cleaner, greener and renewable energy), the profile of solar power is gaining momentum across the world!

With the price of solar panels and equipment falling across the world, solar power is finally coming within reach of Africa’s poor and not-so-poor people.

Seeing the possibility of using solar power as the fastest way to bring electricity to the remotest parts of our continent, several governments, local and international NGOs, and a handful of private companies are jumping on the solar wagon. We estimate that solar energy will become a trillion-dollar market in the coming decades!

In our article: 3+ Guaranteed Ways to Find Profitable Business Ideas in Africa, we identified fixing a problem as the Number 1 way of finding a great business idea.

Our continent is ‘blessed’ with lots of problems. These problems are ‘blessings’ because they contain loads of money for entrepreneurs who can solve and unlock them.

Just as Patrick Ngowi built a multi-million dollar business out of fixing his country’s nagging electricity problems, anyone can fix an African problem with solutions that may already exist in other parts of the world.

All of the entrepreneurs featured in the Get Inspired! section of smallstarter.com did exactly the same thing! They looked out for problems and needs in their environment and found ways to fix and satisfy them. You too can do the same!

Are you interested in starting a solar energy business?

We thought you’d never ask! We’ve written a full and comprehensive article on the solar energy business and how you can start yours. It’s a great introduction to the subject and an exciting opportunity to arouse your interest in solar power and its potentials in Africa.

However, if you’d like to explore other interesting business ideas, the Business Ideas section of this website is just the place for you!

We would love to hear from you about your successes, challenges, advice and questions. Do not forget to leave a comment in the section below and share this inspiring story with your friends.