Have you heard of the UN Women’s Global HeforShe initiative to drive gender equality?

Have you heard of the UN Women’s Global HeforShe initiative to drive gender equality?

Gender equality is a fundamental human right but remains a distant dream for many women worldwide.

The United Nations’ HeforShe is a solidarity campaign for the advancement of gender equality.  Its goal is to achieve equality by encouraging both genders to partake as agents of change and take action against negative stereotypes and behaviors, faced by people with feminine personalities/genders.

Grounded in the idea that gender inequality is an issue that affects all people—socially, economically and politically—the campaign seeks to actively involve men and boys in a movement that was originally conceived as “a struggle for women by women”.

A global movement is underway…

The HeForShe movement is gathering momentum globally as a cohort of select leaders from both the public and private sectors join the drive and stand out as visionaries on gender equality.

On behalf of Standard Bank Group, Chief Executive Sim Tshabalala, has become one of the global “Thematic Champions” in the HeForShe movement. These leaders have committed to implement game-changing policies and concrete actions towards gender parity.

However, a big gap still exists…

In the World Economic Forum’s latest Global Gender Gap report, it is estimated that it will take more the 217 years to achieve workplace equality after gender parity took a step backward in the past year.

While progress has been made in certain countries in Africa to close gender gaps, others remain behind the curve.

Namibia and South Africa both score in the Top 20 in the WEF global report on gender equality – after closing 78% to 76% of their gender gaps – but Sub-Saharan Africa still displays a wider range of gender gap outcomes than practically any other region.

The UN steps in…

Launched by Emma Watson and the U.N. Secretary-General Ban Ki-moon in 2014, HeForShe represented the first global effort to actively include men and boys as change agents for gender equality at a time when most gender programs were only targeting women.

It was the beginning of a trend that only seems more relevant as stories emerge of sexual abuse and harassment suffered by women in the workplace.

The Sustainable Development Goals call for gender equality and the empowerment of all women and girls, but campaigns such as last weekend’s International Day for the Elimination of Violence against Women highlight that there is much work to be done.

The U.N. recently reported that nearly 20 percent of women surveyed said they had experienced physical and/or sexual violence by an intimate partner in the previous year.

Originally conceived as a one-year media campaign to raise awareness about the role of men and boys in gender equality, the HeForShe website garnered more than 100,000 male supporters in its first three days. These males affirmed their commitment to the cause by declaring themselves “HeForShe” and saying that gender equality is not just a women’s issue.

Since then, 1.6 million men have signed up online, including at least one man in every country of the world, and its “Impact Champions” include the presidents of Rwanda, Ghana, Malawi, and Indonesia, among several other heads of state. The issue has also been the subject of 2 billion conversations on social media. 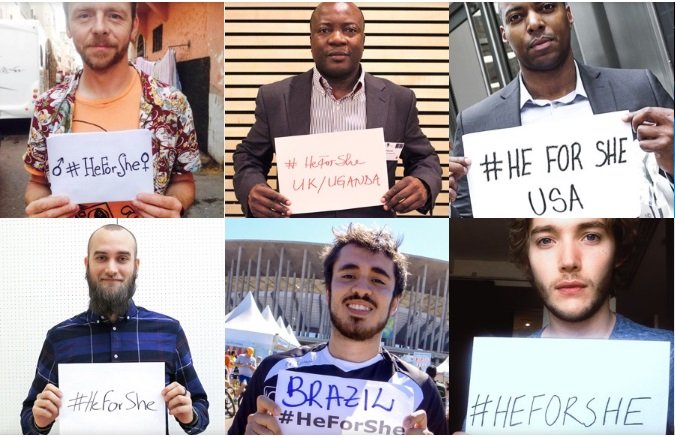 But HeForShe is not without its critics

Many in the gender equality community say they would like to see the movement make more concrete demands of its male champions, and have called for civil society to play a greater role in developing and monitoring the movement.

“Now is a good moment for reflection and discussion about HeForShe, which has achieved high visibility, clear successes, and also drawbacks,” said Gary Barker, co-founder of Promundo, an NGO working to engage men and boys for gender equality, which has advised the HeForShe campaign since its launch three years ago.

“Having that amount of reach and star power on board means there’s huge potential, but we need to harness it before the movement loses momentum … [and] we need to push UN Women to go further and ask more of men,” he added.